Turmeric lattes (or golden milk) have been around for centuries. It’s not new.

They are touted for health benefits and powerful tastes, but not everyone (aside from health experts, and some real foodies) know the true origin.

When something as amazing as “golden milk” or “elixirs” come along, I feel a strong urge to pay homage to its origin, to the people who truly sought it.

Why? Because I feel it’s important to pay respect to the cultures that create things, as it’s often passed on for generations.

The reason that something was discovered as being healthy may date back centuries and it’s great to understand the why behind it so you can truly appreciate how long something was actually around for. Furthermore, you can understand that not everything is due to “modern medicine” and that other culture and older ancestors really knew their stuff.  It’s a beautiful thing in Indian food culture, something that I perhaps took for granted growing up, and that needs to very much be appreciated. I also feel that it brings people together, to understand where things came from…that this too is “Indian food” and so we are open to appreciating cultures more and more.

Let me rant for one second…

Coming from a South Asian/South Indian background, sometimes seeing things, that you know is a very cultural thing, on a high-end grocery shelf or on a yoga Instagram feed being touted as a “new thing” feels kind of like ignorance. It’s great it’s there, but without acknowledging that it existed before becoming popular in North America, is the crazy part to me. This isn’t any fault to the consumer, it’s to the seller or creator of a “new” product or “new” turmeric recipe/elixir. It’s not new.

Furthermore, growing up, we were often teased or sometimes felt shy about our foods, the smells, the colours the look. If I popped into a lunchroom with daal (in which haldi is an important ingredient), a roti, and a thermos of golden milk, do you know the looks and nose wafts I would have gotten? Therefore, now that all of that stuff is so widely embraced and mainstream…yes we want it to be shouted. It’s Indian and it’s cool!!

Also, truthfully, it’s a little annoying when someone that doesn’t know this will try to tell me why turmeric is good and have I had it before (this has happened at a health tradeshow in the past), “yes, my ancestors created that shit, I know…why are you selling it in a bottle and making money off of it if YOU don’t know.” I didn’t say that…but I do feel that if you are creating recipes or food products for profit, you truly should know you aren’t the creator or discoverer, and just pay homage. Just saying…

ALSO to be clear…

It’s absolutely fantastic that people know what turmeric is now and using it so widespread and getting creative with it. That is wonderful and about time.

What I’m saying is please, please understand it’s not NEW. It’s from ancient ayurvedic Indian culture and used widely in food. As is the turmeric latte itself, it is a drink made and passed down in generations. 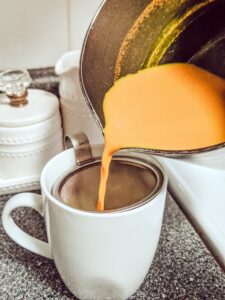 The History Behind Turmeric Lattes or Golden Milk

So for this post, I’m not going to go into Turmeric itself, everyone knows it’s healthy, decreases inflammation, aids with circulation and wound healing, boosts the immune system…it also allows the rich colour of many South Asian dishes, as well as that yes it originated in India.

I do however want to talk about the turmeric latte or golden milk itself. Also called Haldi doodh (literally meaning turmeric milk) or as my family called it saunt.

The Turmeric latte actually dates back thousands of years (surprised?) in a branch of Indian medicine (Ayurveda) which focuses on healing the body and nourishing the mind and soul as well.  This golden milk, whenever made, would be nourishing, taste delicious and bring comfort, and also meant to be sipped, thus cleansing and healing each part of your entire system. In Sanskrit, it was believed, still is, to be a drink of vitality…as it supports circulation and to bring about clarity of the mind and emotion. This is because turmeric is combined with other powerful healing ayurvedic herbs. .

I grew up seeing my grandmothers make it, I saw my mother have to drink it and also make it for us (even though I did not always enjoy it), I also had it made for me after I had my first child. It was common to make this, a milder version sometimes, for anyone when they are sick or feeling unwell. I admit I didn’t enjoy it as a child, but it grew on me as I got older. Like many things, you seem to appreciate things you have readily only with time.

I was told by my family, who migrated from India to Fiji, that whenever a woman had a baby it was part of her post-partum diet. It helped them heal from the inside and kept their body warm, and was always provided before a nap to sleep…also bringing about calmness. It also was made whenever we got sick as kids, because of the notion it would boost our immunity. I truly believe in its power.

And yes, now I completely think it tastes delicious. 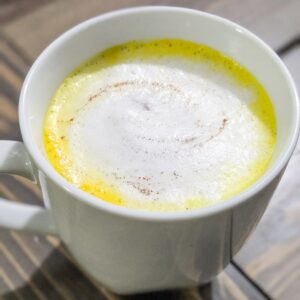 An Authentic Turmeric Latte, as I Grew Up with It

I want to really share two recipes for golden milk or haldi doodh. A traditional recipe is the one that has all that healing power, talked about above, and also the nostalgia of what was created originally.

*These ingredients were sometimes be crushed and grinded into a fine masala powder that would be added together.

My Turmeric Chai Latte Recipe For Day to Day

Of course, like all things, adaptations are born, which is not a bad thing. I never really liked my golden milk with too heavy in spices, so the one I make on the regular is simpler in nature. I also occasionally like to make it with chai tea incorporated, since chai has the cinnamon, cardamom, and clove incorporated (ok a bit of a cheat). 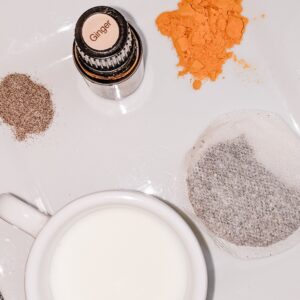 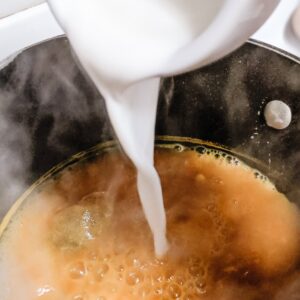 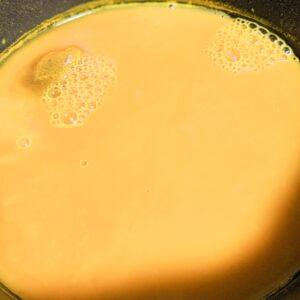 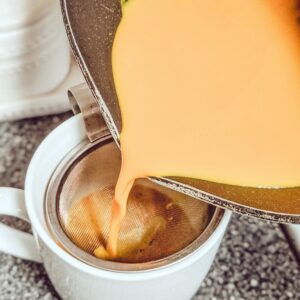 There are also some great products out there if you want to make a turmeric latte but don’t want to gather all the ingredients or have the time. One of the best, I think, out there is the Organika Turmeric Mylk Latte, which does a good job of recognizing and staying true to the ayurvedic medicine roots with added prebiotics.  This one is my personal favourite.

Others you can try include one by Gaia Herbs, Blume’s Turmeric Blend.

I do recall that my family used to get some masala from some local person that would make the spice blends, however, that I have not seen around in years.

To be honest, none are exactly what is made as the authentic one…but I mean neither is my chai version.

So get healthy, stay healthy, and feel great from the inside in.

Enjoy the richness of cultural foods and spread the love and get creative with it.

Do all that, but just know that everything came from somewhere.

Side note…can we finally learn to say Namaste and the proper meaning. It is Sanskrit and used mostly as a greeting, but can be used when leaving as well. It literally means “bowing to you.” Spiritually this can be translated to “the divinity in me greets the divinity in you.” The pronunciation is NUM-MUSTH-EH.  It is often used in yoga, but sometimes you can tell it’s not understood…but yoga itself is also of ayurvedic origin. It all connects.

2 thoughts on “The Turmeric Latte Is Not A New Thing: Haldi Doodh” 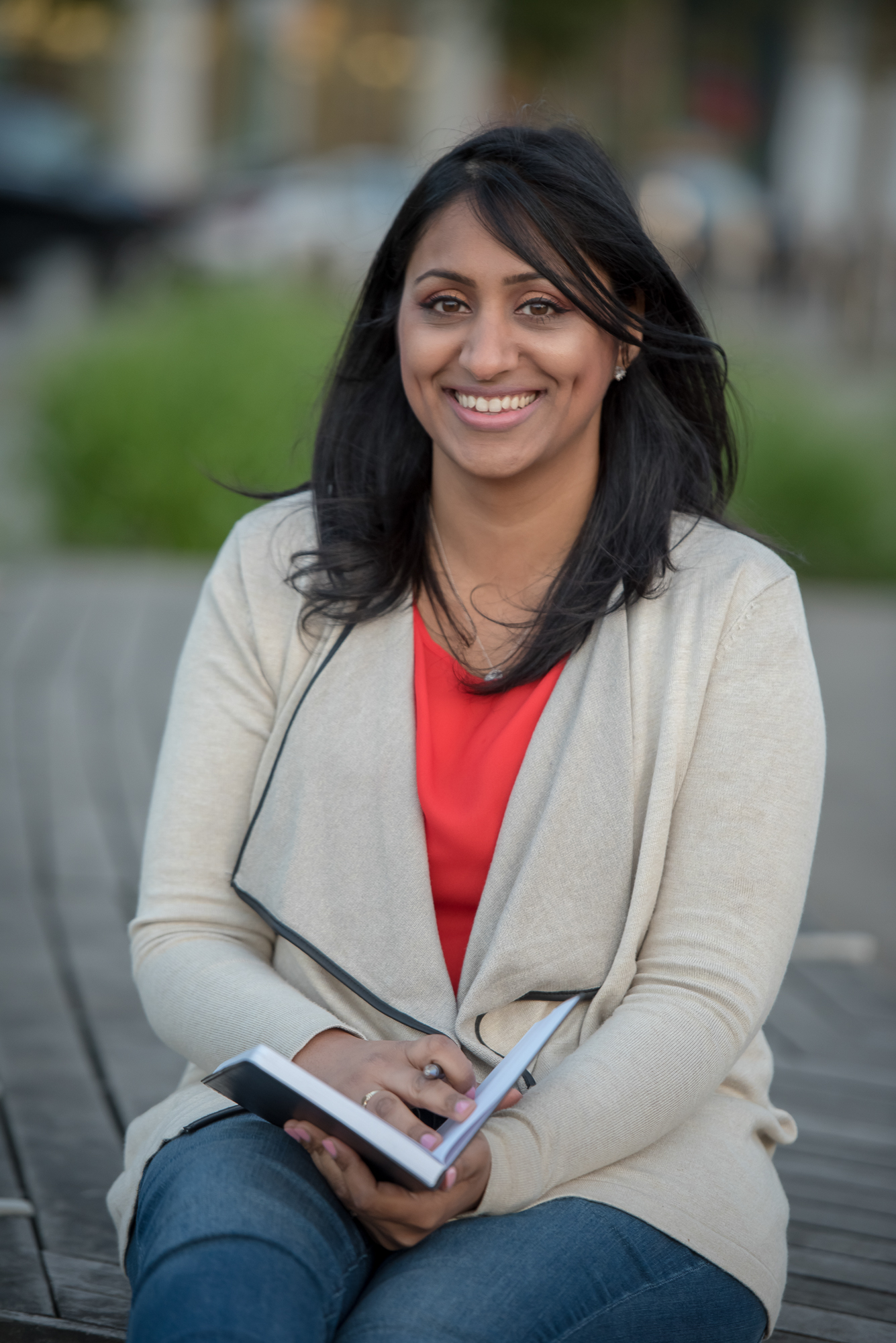